Politics has always been a bottleneck mystery; an obscurity which is unfathomable.Sometimes it raises issues which need our contemplation,in other instances it sets trends which are thorny and complex for the  masses to comprehend.Talking of such trends of changing the state of affairs in politics, the political transformation/ polarisation ensued in 1968 is worth mentioning.It was astounding to observe the small independent parties overruling the mighty congress.Till we approached 1970’s, this political alteration created havoc in the system by encouraging an unethical lure among the political leaders to swap their parties in voracity of political and monetary stability. This led to  premature elections in the year 1971.This political instability did not conclude itself there but it continued to be a phantom haunting India’s politics.
Following the same trend of 1970’s, we are in a trance to decide the political prospect in India. Let us now try to figure out the scenery of elections   to come through the lenses of astrology.
1968… year of transformation
.
After 1967.. this period was the darkest period in the political history of India after independence. It was clear that India was in the middle of the deepest and darkest woods and was groping for a way out. At this juncture polarisation of political parties started. Coalition culture of political parties started first time. Also the Congress party lost its majority in different states and became weak at the centre. Hence there was need for the Congress to take help with regional parties to keep the power with itself.
CHAITRA SHUKLA PRATIPADA’ 1968 29th March’1968/ 4:18/ Delhi 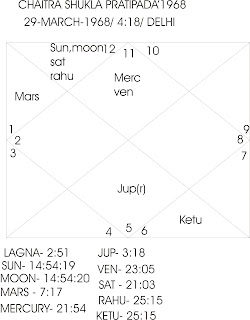 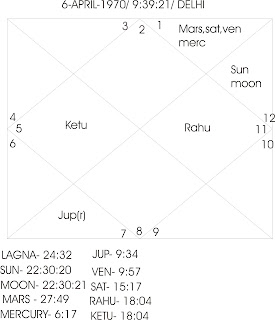 Just to remain in power, Prime Minister of India attempted to rewrite the nation’s laws with the help of parliament.
1971 …Electoral fraud was confirmed by the Allahabad High Court . Allahabad High Court invalidated Indira Gandhi 1971 election on the grounds of electoral malpractices. Instead of resigning, she declared an Emergency in the country and jailed the entire opposition.
CHAITRA SHUKLA PRATIPADA’2012.. Cpc’2012.. 22nd March’2012/ 20:06:59/ Delhi 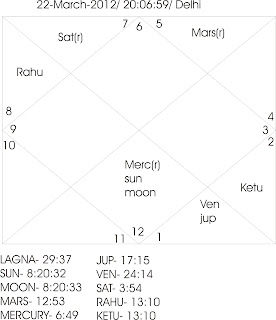 After 1968  polarisation of political parties has again started in 2012 .But mid- term poll is not going to take place. However, intervention of judiciary will take place in legislation , parliamentary affairs.
CHAITRA SHUKLA PRATIPADA’2013..10th April’2013/ 15:05:10/ Delhi 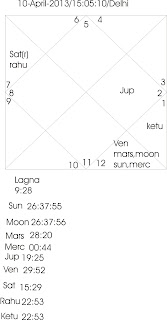 NO mid-term poll . Government will be able to bargain things in its favour.

Just to remain in power, PrimeMinister of India will again attempt to manipulate the nation’s laws/ constitution with the help of parliament.
9th lord in 8th house. 9th house is in rahu/ ketu axis. 9th house is aspected by 6th lord.
Significant change in judiciary.
CHAITRA SHUKLA PRATIPADA’2014.. 31March’2014/ 00:14:31/ Delhi 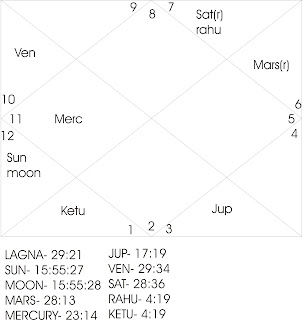